Funny how life works out sometimes. When one door closes and another door opens. This show was actually the catalyst that launched my year long journey into following MY dreams.

I had just been hired by a very up and coming software company and was really looking forward to getting back into the high tech industry. Turns out life had a better plan for me.
As I was sitting in my tiny cubicle trying to work through the horrid training day, I missed a call from the event production company I worked wardrobe for. As it turns out the software training class of 30 was dwindling, as they were weeding people out. I wasn’t fully expecting to get cut that day, but when I did I was really disappointed. As I was heading out of the building a bit bummed, my phone rang again with a call that changed my year.

I was asked to work as a seamstress for Justin Bieber and get back to her with any other stitchers who could sew a big job the show requested. I made a few calls and rounded up a crew of 3 plus me.

My sewing friends Kyle Vest (of Skin Wars Fame), Karen, Steve Walden and I arrived at the arena with sewing machines in tow on January 25th, we were escorted back to a room beyond the normal wardrobe area. It was there, we learned we were 4 of 7, who would be upcycling 17 sets of navy sweatsuits to piece in some blue faux leather for Justin’s dancers to wear in tomorrow’s filming of “Boyfriend” for his 3D Believe Concert Tour Movie being shot in Miami.

So as we are setting up our machines his regular wardrobe crew was cutting out the materials we would use and trying to formulate a plan. The hoodie sweatshirts had baseball shirt style sleeves, which had to be removed, cut off above the elbow and replaced with faux leather, then also replace the front pocket, the lower part of the pants below the knee and some other alterations. 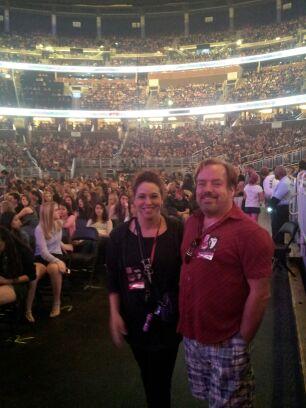 We decided to set things up like a production line with each person doing a part of the project. Steve and I, took on the most difficult part of the project, which was replacing the upper part of the sleeves. Steve is an old school Seamster, who has spend most of his career in theater, he’s super smart when it comes to design engineering. We whipped up the first one and took it over to the head of wardrobe for inspection. After the upcycled top was approved Kyle, Karen, Steve and I had 16 more to go while the other team of 3 worked on the pants.

About midway thru the day, we were interrupted by a sweet talkative little bald girl, who was obviously a cancer patient. She informed us this was not the first time she has met Justin Bieber! It was nice to know he takes the time out to make wishes come true for kids like her.
8 hours later we were done ahead of schedule and the costumes premiered that night in Orlando.

It was then that I decided not to look for another day job and figure out a way to do what I love to do, full time. It worked!

Since I could loose my job for taking photos back stage I had to surf the net for a few weeks waiting for photos to surface from the movie shoot. I finally found a few.
In August, I got to work for JB a second time during his Tampa show. This time in wardrobe and quick change with the same touring wardrobe crew. 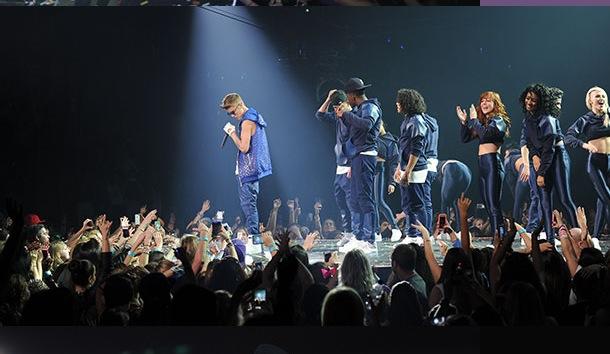 There are about 25 dancers and crew inside the stage that make the whole show go like a well oiled machine. It was amazing to see such synchronized teamwork. It was the most impressive quick change and behind the scenes assignment I’ve had to date.
The movie came out this week. I can’t wait to see it! Who wants to go?